Going Up The Country – Too Easy!

So, here we are in the Land Down-under… second breakfast consumed in the style of wandering Hobbits far from The Shire and back on the road. Oh my word! What a road!
The freeways in rural Australia it seems are broad and both flanked and divided by greenery. That is to say what we might cheerfully refer to as a central reservation in Europe is more like a Central Park in Oz. The first thing that struck me was how quickly we had left the urban sprawl and reached the rural pastures of up-state Victoria. I would later learn that these are in fact neither pastures nor fields, but rather locally known as paddocks. There were to be more confusing linguistic differences to be encountered later on. For now my mind was on the road and sensible to the infamous keenness of the Australian constabulary’s traffic division, I wisely set the cruise control to something safely below the limit and relaxed, the roads being quiet, to enjoy both the drive and the scenery.
What interested me most was the familiar landscape – it might have been anywhere in rural middle England – and the very much unfamiliar trees. I took them to be Eucalyptus but it turns out there is an almost endless variety of Gum trees and not necessarily of the cough sweet flavouring  persuasion.
It was about an hour and a half before we saw the sign for Avenel, our destination. I was going to be staying with my dearest and best friend of over 30 years, Natalie, who I hadn’t seen for almost 5 years and very excitingly I was going to meet her new daughter – my “niece” – 9 month old Finley. Meanwhile, the Aged Ps would be enjoying the hospitality of the local hostelry, to wit The Harvest Home Boutique Hotel.
Now I don’t know, dear r, how many of you might recall the early Australian soap-opera “The Sullivans” which played on what amounted to daytime TV in my youth, but if you do then you have been to Avenel. Wide rural avenues, little tin-roofed bungalows, one house every 50 or so metres… absolute rural bliss it seemed on first acquaintance and nothing occurred to dissuade me from that view in the time we were there. Quiet? Yes. Sleepy? Perhaps, but if you like the quite country life then this is the sort of place you could easily fall in love with. 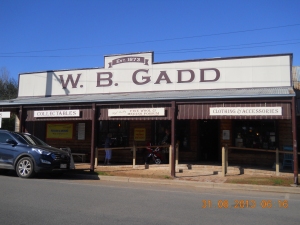 The excited and warm greeting from Natalie was wonderful and so was the first sight of Miss Finley. Nat’s house is quite charming as pre-built dwellings go. A little long and box like but with all mod-cons and the winning feature is the covered deck and the delightful garden and so I felt at home right away. Not least because it was so good to see her again after so long. 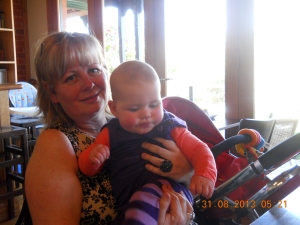 After a restoring cup of something hot I followed Nat’s directions and took M & D down to their hotel. Now, if you can picture an Victorian style two-storey colonial building complete with veranda set on the street corner, looking a little tired and denying its once former glory then you might well be visualizing the Harvest. If not, here are some photos to help you.

Well, I knew we were a little early, but nonetheless I assumed that we would be welcomed into the hotel, even if it was just to drop the bags. We knocked, we rang, we telephoned. On espying two young girls through the window we rattled and tapped and called “coo-eee”. All to no avail. Somewhat at a loss, I phoned Nat and she duly popped down to see if she could be more effective in attracting the attention of the inhabitants (one of the girls was now crying which convinced me that they had been abandoned). having adapted to the Australian way of putting oneself forward, Natalie banged loudly on the window pane and yelled “Oy! There are people to check in!” Worked a treat! Within moments the portals were flung wide and we were greeted with handshakes and apologies and welcoming words and assurances, followed by a guided tour, a potted history and promises to make all our dinner/lunch reservations in the district on our behalf. It has to be said that after the initial shaky start – that is to say, thinking we had made a hideous error of judgement – Damien and Sonia could not have done more to both help and make us welcome in their very fine and once you get inside, very beautiful establishment. I honestly cannot recommend highly enough staying at the Harvest Home if you are travelling through central rural Victoria. The service was superb, the attention to detail exceptional and the room my parents had was very well-appointed and comfortable.
So, after a short intermission, during which Nat and I had a bit of a catch-up, we reconvened at a local eatery, then known as The Thyme and Place, 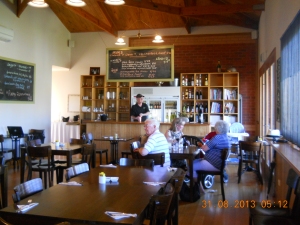 which has sadly since closed and enjoyed an excellent lunch. After lunch we explored the interior of the local odd bits of whatever they could cram into it store where I would later buy a bush hat and then parted company till the evening. I of course heading straight for the land of Nod and diving into a thoroughly well-earned Siesta. Well, dear reader, I have to say it worked a treat! For the first time when I awoke, I felt as if my body clock had returned to normal.
The evening’s entertainment lay in the form of a barbeque, excellent meats having been earlier obtained from the local butcher and which were in due course cooked by yours T.
A final smoke on the deck, contemplating the Southern Cross and feeling relaxed and well and truly at home. A feeling I always have whenever I’m with “my little sis”.

As Aussies put it these days instead of OK or fine everything is Easy or Too Easy! I reckon that about sums up my first impressions of rural Australia.

2 Responses to Going Up The Country – Too Easy!